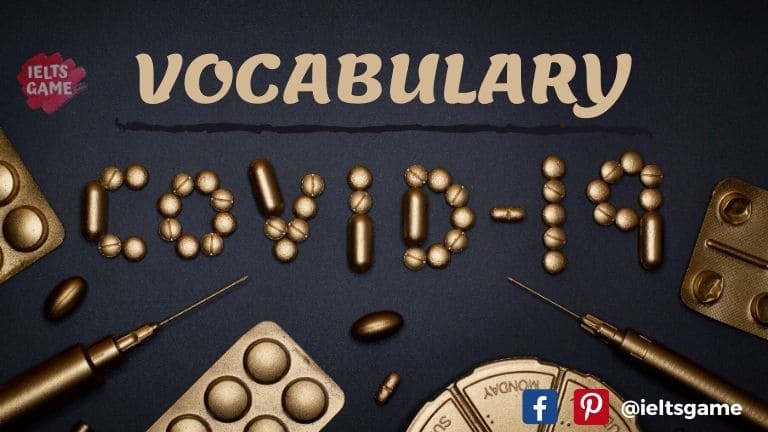 In this article, IELTSGame.com will add English words and vocabularies which are related to Corona virus.

1. animal-human interface (noun): any point where animals (domestic and wild) and humans meet.

2. asymptomatic (adjective): showing no symptoms of a particular disease.

3. carrier (noun): a person or animal that transmits a disease to others, whether suffering from it themselves or not.

4. carry (verb): be infected with a disease and able to transmit it to others, whether symptomatic or asymptomatic.

5. community spread (noun): transmission of a disease directly within a community and not by importation from a foreign source.

6. contact tracing (noun): identification and monitoring of people who may have had contact with an infectious person.

7. contagious (adjective): describing a disease that can pass from person to person, usually by direct contact; describing a person with such a disease. See infectious.

8. coronavirus (noun): any one of a large family of viruses that can cause disease in the breathing and eating systems of humans and animals (respiratory and digestive systems).

Seen through a microscope, coronaviruses appear circular with spikes, like crown, and are named from the Latin for crown, which is corona.

Corona viruses normally originate in animals and usually cannot be passed to humans.

But very occasionally a coronavirus mutates and can then be transmitted from animal to human, and then from human to human.

This is how the SARS epidemic started in the early 2000s, for example

10. diagnose (verb): identify an illness by examining the symptoms

11. diagnosis (noun): identification of an illness by examination of the symptoms

12. disease (noun): illness; sickness; a disorder of the body

13. droplets (noun): the spray produced when people cough or sneeze, and which can spread diseases like COVID-19

14. epidemic (noun): occurrence of a particular disease in a large number of people in a particular area. See outbreak, pandemic

15. herd immunity (noun): an indirect protection from a disease resulting from a large percentage of the population gaining immunity (either through vaccination or through recovering from the disease)

16. incubation period (noun): the time from a person’s first exposure to a disease to the time when symptoms develop

17. infect (verb): affect a human or animal with a disease-causing organism

20. infectious (adjective): describing a disease that can be transmitted through the environment; describing a human or animal capable of spreading an infection. See contagious

21. isolate (verb): keep an infected person away from healthy people.

23. mask (noun): a piece of fibre or cloth that fits over the nose and mouth to protect other people from the wearer’s germs and/or the wearer from germs in the air

25. outbreak (noun): a sudden occurrence of a disease (or other unpleasant thing). See epidemic, pandemic

26. pandemic (noun): occurrence of a particular disease throughout a whole country or the world. See epidemic, outbreak

27. pathogen (noun): a micro-organism or germ such as a bacterium or virus that can cause disease

28. patient zero (noun): the person identified as the first to become infected with a disease in an outbreak

30. person-to-person (adjective): describing the spread of a disease from one person to another, typically through touch including shaking hands, kissing, sexual intercourse etc.

31. quarantine (noun): isolation and monitoring of people who seem healthy but may have been exposed to an infectious disease to see if they develop symptoms.

32. Reservoir (noun): An animal, plant or environment in which a disease can persist for long periods of time.

34. screening (noun): testing of people for the presence of a disease. For COVID-19 the first step in screening is usually taking a person’s temperature

35. self-isolate (verb): isolate oneself; put oneself in quarantine, away from other people

36. social distancing (noun): practice of encouraging people to minimize contact and closeness, whether by banning large or even small groups/meetings (football matches, nightclubs), or by maintaining a minimum distance between people (for example one metre or two metres)

37. superspreader (noun): person infected with a virus etc who transmits or spreads it to an unusually large number of people

41. transmission (noun): transfer of a disease from animal to human or from human to human

42. transmit (verb) – often passive: cause a disease to pass from animal to human or from human to human.

43. treat (verb): attempt to cure or alleviate an illness or injury through medical care

44. treatment (noun): medical care given to a patient for an illness or injury

45. vaccine (noun): a substance used to protect humans and animals from a disease.

46. viral (adjective): describing something like, caused by, or relating to a virus or viruses

47. virus (noun): a living thing, too small to be seen without a microscope, that causes infectious disease in animals and humans

48. zoonotic (adjective): describing a disease that can be transmitted from animals to humans

Coronavirus related topics are highly expected to appear in the next months in IELTS exam in all modules: Writing, Speaking, Listening, and Reading.

Follow up IELTS Game, and we will add more IELTS material and data related to this topic in the next days.

Finally, you can get the latest updates about IELTS exam dates from the official IELTS website through this link.

6 Comments on “English Vocabulary Related to Coronavirus With Meaning & Examples”