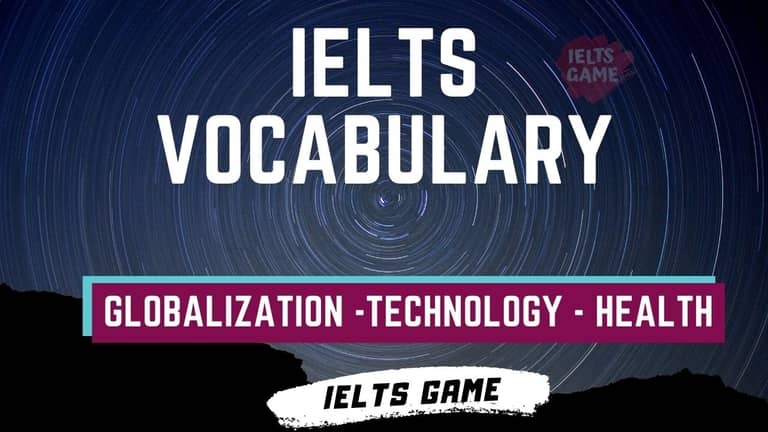 Today we continue talking about vocabulary for IELTS. We have already discussed useful tips and methods for learning new words and phrases.

In this article, IELTS Game is going to cover expressions that you’ll be able to use while speaking or writing exam on the topics Globalization, Technology, and Health.

These topics are very common in different parts of the IELTS test. So, it’s necessary to know all this vocabulary.

Write out words and phrases that you don’t know and practice using them in your speech and writing. Let’s start with the topic Globalization.

Firstly, let’s discuss what globalization is.

Globalization is the trend of increasing interaction between people or companies on a worldwide scale due to advances in transportation and communication technology.

The first important words connected with globalization are developing countries and developed countries.

For example: Though it once reigned alongside the United States as a world superpower, Russia is not classified as a developed country as of 2015.

There is also another good term – emerging economy or emerging market economy which means that a nation’s economy is progressing toward becoming developed and advanced.

Now let’s talk about the term global and some combinations with it:

For example: People are afraid that the evolution of a global village will raise conflicts between cultures.

For example: Thanks to global economy a shirt is now likely to cost roughly the same amount of money in New York as in New Delhi.

For example: Global trade not only results in increased efficiency but also allows countries to participate in the global economy, encouraging the opportunity for foreign investments.

Another useful words connected with globalization

For example: In 2006 Apple faced allegations that its iPod was being produced in China’s sweatshop conditions. The Apple incident illustrates how sweatshops can thrive with such practices as outsourcing.

For example: Offshore outsourcing is often criticized, which can mean bad public relations for a company.

For example: Some people fear that globalization will inevitably lead to total loss of cultural identity.

– Our next group of words is prosperity, standards of living, and Human Development Index.

For example: Globalization plays an important role in contributing to sustainable prosperity for all people.

For example: The standard of living includes factors such as income, availability of employment, affordability of housing, quality of healthcare, and many others.

For example: Human Development Index also shows that countries with lots of income do not always spend money in ways that create high life expectancies or education levels.

Let’s move on. Our next term is consumerism. It is the belief that it is good for people and society to spend a lot of money on goods and services.

For example: Although consumerism can take many forms, it generally refers to very high levels of excessive consumption.

The differences between these words are subtle but important for precise writing and speaking.

For example: It’s noteworthy that during the boom years when Ireland had close to full employment not many people chose to emigrate. Every member of the Jewish religion is eligible to immigrate to Israel.

There are two more terms that you will definitely need:

cultural convergence is a tendency for cultures to blend and become more alike;

cultural divergence describes things that make separations of cultures. The English language is a prime example of cultural convergence on a global scale. That’s it for the word pairs.

You should also know the names of some international agencies which directly influence globalization development. For example:

Here’s a list of some other very useful words and phrases on this topic:

Now it’s time for another important topic of IELTS.

Let’s talk about some technology terms and phrases. Don’t forget to write down unfamiliar words.

We will start with three expressions which require no definition.

It is our time, the time of technology and gadgets, social networks addiction, and knowledge-based society.

For example: The arrival of the digital era was so rapid that we have not yet managed to cope with all the consequences.

Another three words which you are very likely to use in your writing or speaking section on technology are:

For example: The internet revolution changed the way that people got and shared information, affecting everything from social relations to the way they work.

Although always with risk, technological breakthroughs promise the most pressing global challenges of our time.

For example: We also work with universities and other experts to ensure that we remain at the cutting-edge of technology.

For example: Millennials are tech-savvy, thrifty, and more likely to stream entertainment online than other Americans.

Over the recent decades, it has become a buzzword in the IT world.

Cloud computing means that instead of using all the applications physically installed on your computer you can access them over the Internet.

They are provided as service by another company. And it applies not only to computer programs but also to hardware capacity.

For example: The Google Docs service allows users to upload documents, spreadsheets, and presentations to Google’s data servers and serves as an example of cloud computing.

And here are two more words: wireless and mobile.

Do they have the same meaning? Yes and no.

Sometimes you can use either, but they represent different concepts. Mobile is a word to describe the nature of devices.

You probably know some of the discussed words and expressions.

But I encourage you to think whether you normally use them while speaking or writing.

Do you feel comfortable with them? If some of them confuse you, come up with several sentences to practice their usage.

And remember to return to these words here in ieltsgame.com after a while.

Let’s discuss another important topic which will be very useful if you want to score high in IELTS – Health.

In terms of lexis, this topic incorporates a lot of useful words and phrases which can also be used when talking about food, diet, and even sports.

Our first word is a check-up which is doctor’s examination to ensure that you are healthy. That’s a good way to make sure you have no health problems.

For example: It is recommended to have your medical check-up on a regular basis.

There is another good word: epidemic, but with negative meaning – a disease affecting a disproportionately large number of individuals within the population.

For example: The current epidemic of obesity is caused largely by an environment that promotes excessive food intake.

There are some useful expressions with this word:

When you have a disease, you need a doctor to diagnose it, which means to recognize a disease or illness.

Your doctor will diagnose a disease based on your medical history and test results.

When a disease is diagnosed and treated, but there are no signs of improvement, we can talk about deterioration – the process of something getting worse.

Another good health – or maybe it’s better to say sickness – word is chronic.

Its easy definition is existing frequently or most of the time.

For example: Sugar may not be the only contributor to a chronic disease, but it is by far the easiest one to avoid.

If you are in one room with a sick person you can easily get infected.

To infect means to cause somebody to become affected by a disease.

For example: If you return to work after your sick leave too soon, you may infect your colleagues.

After being properly treated people usually recover, which means that they return to normal condition, or get back from being ill.

For example: He had a stroke but is recovering well.

How do doctors recognize certain diseases?

Correct, on the basis of symptoms, which are changes in your body or mind showing that you are not healthy.

For example: The symptoms of flu usually develop within two days of becoming infected.

A widely used expression with the word symptom is the onset of symptoms, which is when your symptoms become noticeable.

What should people do not to get sick and prevent disease?

They say that exercise and a healthy diet can prevent heart disease. So, preventing something means to act ahead of something.

A vaccine is an injection to protect against a particular disease.

For example: Researchers are trying to develop a vaccine against swine flu.

When people suddenly get a high temperature, they usually call an ambulance, which is a vehicle that takes sick people to the hospital, especially in case of emergency.

For example: Because of high pressure, the woman was taken by an ambulance.

For example: In case of medical emergency, a patient might be asked about his or her blood type.

Talking about health problems, it is also very important to mention fatigue – a state of being very tired and exhausted.

For example: Driver fatigue is a major cause of road accidents.

For your reference, we have prepared some additional health-related words and phrase.

We will go through them and if any of them are unfamiliar to you, take some time to familiarize yourself with them.

I hope you will make good use of this vocabulary, and it will help you to get the band score you need at the IELTS test.

This is not a complete list of vocabulary on these topics. If you have some terms and phrases to add to this list, share it with us and write it down in the comments box 🙂

Good luck and see you!