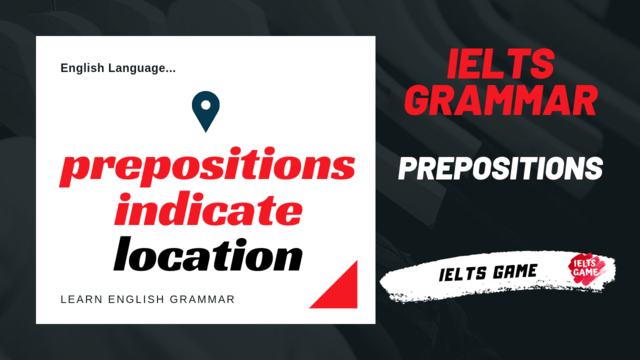 As we talk before, Prepositions show the relationship between a noun or a pronoun and some other element in a sentence or phrase.

In this article, IELTS game website will talk about another type of prepositions that indicate location of someone or something with examples and exercises.

This part of grammar will help you in your journey of IELTS preparation, particularly writing and speaking parts.

Location can be thought of as the area, point, or surface of some-thing. Certain prepositions indicate those locations.

Some of the most common prepositions used with location

Most of these prepositions make sense in the same sentence, because they all indicate location:

Look at these examples:

– Is Guadalajara located in the east or west?

– The center of the earthquake was situated near Los Angeles.

– Shells like this can be found along the banks of the river.

– John sits in front of me.

– The girl was lying on a cot and resting.

– A stranger stood next to us.

– I have to remain at my workbench until noon.

– We live between two large houses.

As long as you know the meaning of the prepositions, you can use them with relative accuracy.

But in English, just like in all other languages, certain prepositions can only be used with certain verbs or phrases.

And even if two or more prepositions can be used with the same phrase, there
is a change in meaning—even if it’s only a slight change.

Let’s look at the prepositions at and in.

They are used quite commonly and have a meaning that is easy to understand.

In most cases, at is used to show that someone or something is positioned next to a horizontal or vertical surface:

The preposition in indicates that someone or something is located inside something:

These two prepositions, while having very distinct uses in a sentence, are also often used with the same phrases. But when they are, the meanings are different.

Differences between “at” and “in”

Use at to show that someone is at the location of his or her occupation, preoccupation, or some activity:

With certain phrases, in can also be used:

Notice the difference in meaning between the two prepositions:

Take note of yet another difference of meaning when the definite article the is added to the phrase:

There are several phrases that omit the definite article the when the preposition at is involved.

Such phrases indicate that someone is involved in the activity described in the phrase:

The preposition “Among” & “between”

Be sure to distinguish between the prepositions among and between.

Use among to say that you are in the company of more than just two people.

Use between to say that you are in the company of only two people:

Another pair of prepositions is often used to show “by means of what transportation” a person travels.

It is common to use the preposition by to show the concept of traveling in a conveyance:

But in and on are also often used to show location on the forms of transportation:

Besides the verb to be, which is frequently used to show location, there are several other verbs that also indicate where someone or something is as:

Of course, there are many other such verbs. Those in the preceding list are among the ones used frequently.

What are Complex Sentences in IELTS Writing Task 2?