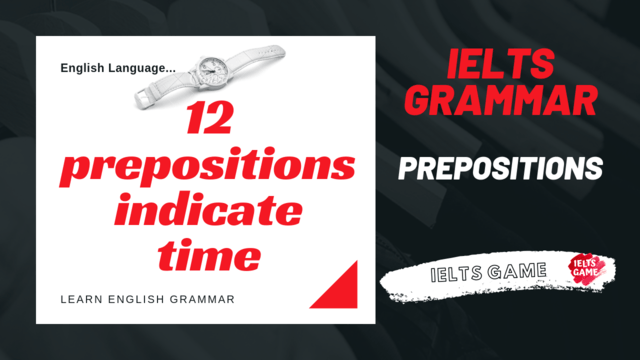 12 prepositions that indicate time in English language - Grammar for IELTS

What is the preposition?

A preposition is a word used to link nouns, pronouns, or phrases to other words within a sentence.

They act to connect the people, time, objects and locations of a sentence. Prepositions are usually short words, and they are normally placed directly in front of nouns.

Prepositions show the relationship between a noun or a pronoun and some other element in a sentence or phrase.

Many prepositions have some very specific uses. Sometimes they even act as other parts of speech.

They can be adverbs. Or they can be the prefix on a noun or verb.

A preposition of time is a preposition that allows you to discuss a certain period of time as dates, days of the week, or the actual time something takes place.

Prepositions of time allow you to tell your readers when things are taking place.

They are vital parts of speech to use in stories, as well as when writing simple communications, reports, and other items.

You will use prepositions as a part of grammar for IELTS exam, mostly in speaking and writing, in both academic and general modules.

There are several prepositions that are used in expressions of time:

These prepositions are used with a variety of moments in time and in phrases that answer the question as when.

The preposition at is used primarily to point out an event in time or a time shown on a clock:

– The soldiers finally got back at dawn.

On is used primarily with days of the week and dates:

on Monday, on Tuesday, on Wednesday, on Thursday, on Friday, on Saturday, on Sunday, on June twelfth, on the fifteenth of May.

– We’re starting a new project on the first of the month.

Use in for a nonspecific time of a day, of a month, of a year, or of a season:

Use for with a specific event in time:

for Christmas, for the holidays, for your birthday party, for the celebration.

I’ll be there for your baby’s christening.

Other prepositions that indicate time

Most other prepositions can be used in many varied expressions of time:

2 Comments on “12 prepositions that indicate time in English language”