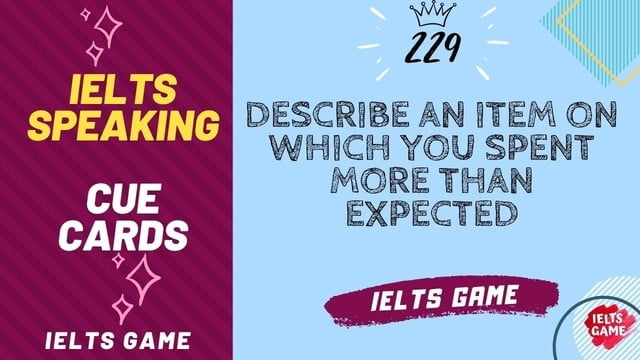 229. IELTS Cue Card -
Describe an item on which you spent more than expected

In this article, IELTS Game will add number 229 IELTS cue card sample on the series of 2022 cue cards with band 9.0 model answers and part 3 follow up questions that will help you in your IELTS test preparation.

This cue card is related to “Item description” speaking topic and asking you to “Describe an item on which you spent more than expected“ and asking IELTS speaking part 3 follow up questions from Makkar Jan-April 2022 cue cards guesswork.

Describe an item on which you spent more than expected.

• Recently, my old phone broke down and I had to buy a new phone.

• I considered various models but ultimately, I decided to buy the Apple iPhone.

• I think I made the purchase because of the brand name and because of friend’s reviews.

• The phone was much more costlier than I expected.

• I still went for it because I wanted to own an iPhone.

• Previously, I had a Samsung phone, but all my friends told me that Apple is way above Samsung in quality.

• After buying it, I also felt that Apple is better.

• The camera quality was better, the response rate was faster, the look was more elegant.

• However, deep down, I knew I didn’t care about these things.

• I rarely click pictures with the phone and even if I do, I am fine with a lower resolution.

• And, above all, the price was way higher than the other models in the market.

• I know I am not a heavy mobile phone user.

• I mainly use the mobile phone to call and to check WhatsApp messages.

• Besides that, I use barely 2-3 apps like Zomato for ordering food and Uber for travelling.

• I knew I could have that done all that I wanted with a much cheaper version, but I still went for the Apple iPhone.

• Finally, because of this decision, I had to postpone the decision of buying a new laptop, which I urgently need.

• My old one is about 6 years old and sometimes it takes nearly half an hour to start up.

• A new laptop would have made my life much more comfortable than the iPhone did.

• For all these reasons, I regret buying the iPhone and spending so much on it.

“Describe an item on which you spent more than expected”

1. Do you often buy more than you expected?

Yes, I often buy more than I expected, but it is normally in case of small household items or grocery items.

For example, I would buy 2 pairs of jeans if they are on an offer, even if I need just one. The iPhone was the first time, I spent so much more than I should have spent.

2. What do you think young people spend most of their money on?

I think young people spend their money on clothes and other fashion accessories like belts, shoes, etc.

Also, I think a lot of youth spend their money on gadgets like mobile phones, laptops, and headphones.

3. Do you think it is important to save money? Why?

Yes, I think it is crucial as we can never be certain about the future. The recent Corona epidemic has made it even more clear that how uncertain life is. Many people died because they couldn’t afford the costly healthcare.

Also, if people didn’t have savings, it would have been impossible to tide over these difficult times.

4. Do people buy things that they don’t need?

Yes, all the time. I think we buy things because buying things makes us happy. Even though we know we won’t be using the thing, we buy it for momentary happiness.

A common example is an electric drill, which people barely use for 10 mins after buying and then collects dust sitting unused for years. 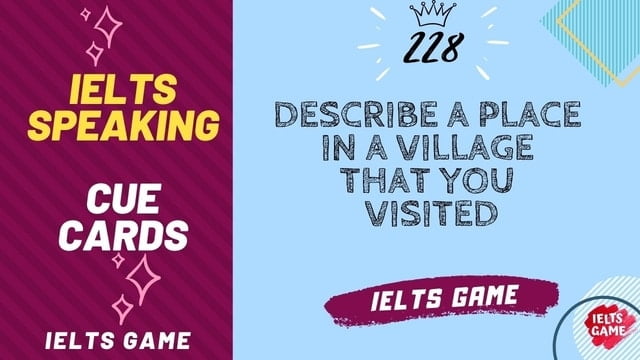 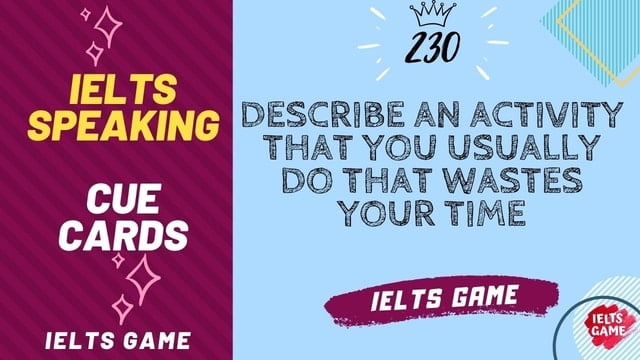