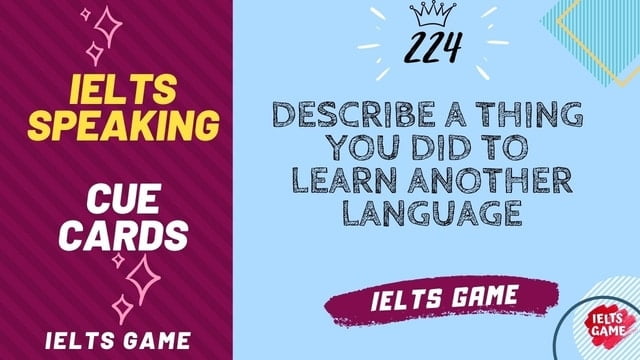 224. IELTS Cue Card -
Describe a thing you did to learn another language

In this article, IELTS Game will add number 224 IELTS cue card sample on the series of 2022 cue cards with band 9.0 model answers and part 3 follow up questions that will help you in your IELTS test preparation.

This cue card is related to “Learning Language description” speaking topic and asking you to “Describe a thing you did to learn another language“ and asking IELTS speaking part 3 follow up questions from Makkar Jan-April 2022 cue cards guesswork.

Describe a thing you did to learn another language.

• I started learning Spanish recently. I have always wanted to learn a foreign language.

• I feel that knowing a foreign language allows us to understand different people, cultures, and environments

• I have an aunt in California who mentioned that she started learning Spanish.

• I thought she was so lucky to have an institution in her hometown that teaches Spanish.

• But then she told me that she was learning from a mobile app called Duolingo.

• She really loved the app and told me it had short lessons and all you need is 10-15 minutes a day.

• I downloaded the Duolingo app on my phone and a desktop version on my computer.

• I was so impressed with this app and couldn’t believe that the basic version was free.

• It had more than 30 languages like German, French, Spanish, Chinese, etc.

• It had a very simple user interface, and it was very easy to create an account and get started.

• I was really confused between learning French and Spanish but decided to go for Spanish.

• Spanish is the fourth most spoken language and is spoken in many countries like Spain, Mexico, South America.

• I also wanted to practice Spanish with my aunt online.

• I started doing lessons in my free time. I would do them on the bus while commuting to my college.

• I would do them while waiting for friends. It was so convenient to have on the go learning.

• One of the beginner lessons was common phrases like Hello – Hola, Good Morning – Buenos Dias, Nice to meet you – mucho gusto. I really liked doing this lesson.

• I also started watching a Spanish show called Money Heist on Netflix to add to my learning.

• Duolingo presented the lessons in a very simple manner. It not only helped me with speaking Spanish but the lessons were designed to help me learn, writing it too.

• Also, it was fun to do as there were rewards for reaching different levels and practicing daily.

• There was also an option to add friends and track each other’s progress. I added my aunt and it kept us both motivated to learn.

• I am still learning and still using the app every day. I am so happy and satisfied with my effort so far. I hope to become fluent one day.

• It gives me so much joy when I can completely understand a few lines on a Spanish show or when recognize words in Spanish subtitles.

“Describe a thing you did to learn another language”

1. What difficulties do people face when learning a language?

One of the challenges is the phonological difference. There are some sounds that exist in one language but not in the other language.

Another difficulty is learning the grammar and the sentence structure of the new language.

2. Do you think language learning is important? Why?

Yes, I think language learning is important as it develops skills such as communication and cultural awareness.

Learning a foreign language also opens all sorts of career opportunities. Learning new languages leads to cognitive development. Bilingual and multilingual children do better in other subjects too.

3. Which is better, to study alone or to study in a group? Why?

It is better to study in a group.
1) Students derive energy from being around other students and are motivated to study.
2) Concepts that are hard to grasp by yourself are easier to understand from another person’s perspective.
3) People usually procrastinate when studying alone but, in a group, one is accountable and must be present.

4. What’s the best way to learn a language?

There are many ways to learn a language. There is no one best way. One must do a combination of things to get fluent in a language like practicing daily on language learning apps like Duolingo, watching movies in the foreign language, reading books and newspapers, having a tutor or a native speaker online to practice with, and traveling to those countries. 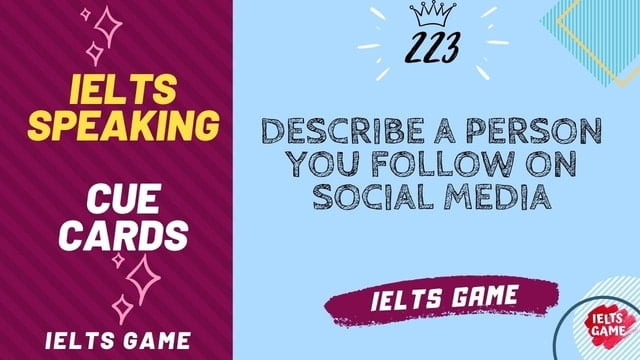 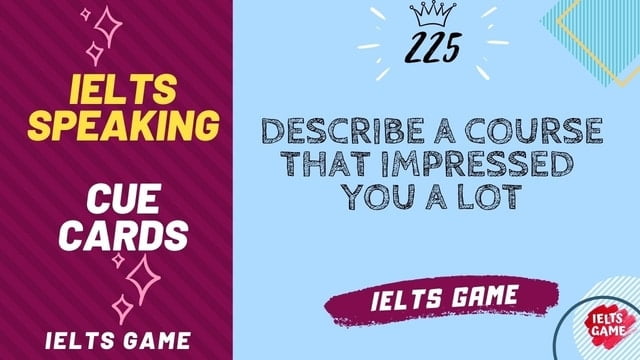 IELTS Cue Card: Describe a country you have visited

[2020] Describe something you bought was difficult to use at first

[2020] Talk about someone who encourages you to achieve goals