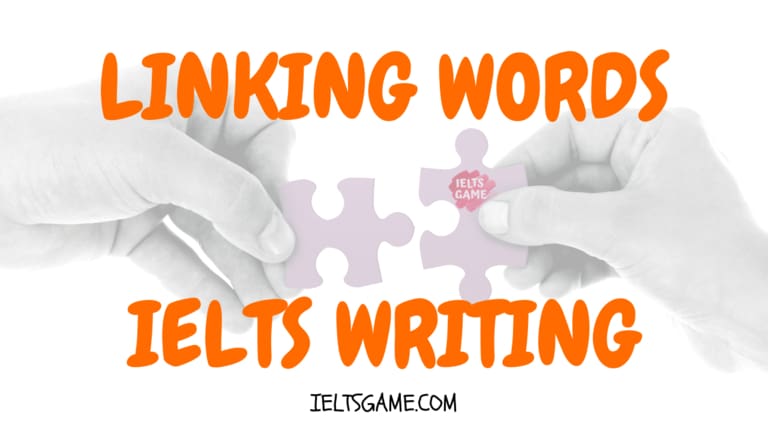 In one of our previous articles, IELTS Game talked about one of the assessment criteria of the Writing part in IELTS – Coherence and Cohesion or your ability to express the ideas in a clear and logical way.

One of the most important skills in this category is connecting your ideas.

To connect the sentences and paragraphs in your essay, you need to know a lot of linking words. So, in this article we will discuss the most useful linkers for Task 1 and Task 2 of the Writing test.

The first group of linking words is used to connect similar ideas and to add extra information.

You may need these words both in Task 1 and Task 2. These words are:

Let’s look at the examples:

In addition to these four systems, there is also the Logographic system, which works on a different principle.

Sometimes you will have to connect not only similar ideas, but also the different or opposing ones.

To do so, you will need the following expressions:

In about 1990, the death rate overtook the population growth rate for the first time; however, all three trends remained roughly static over the next ten years.

While questions have been raised regarding the negative impacts that accompany the growth in the travel sector, these definitely do not outweigh the associated benefits.

Very often essay questions require you to show comparison or contrast of something.

Task 1 questions are also constructed in the way that you should compare some figures or data.

So you need to know the following linking expressions for comparison and contrasting:

To begin, the percentage of pupils in voluntary-controlled schools fell from just over half to only 20% or one fifth from 2000 to 2009. Similarly, the relative number of children in grammar schools — just under one quarter — dropped by half in the same period. (comparison)

To begin, white tea is unique as it involves no other processing. In contrast, green, oolong and large leaf black tea are all rolled as part of the process. (contrast)

It can be confidently conveyed that, even though the growth in travel industry has accompanied negative social impacts, these do not outweigh the contributions made by this sector towards social development. (contrast)

When you write an essay, you may sometimes need to repeat the same ideas in other words to make it more clear or to prove it.

This technique will show your good knowledge of vocabulary and will add extra 10 or 15 words to your essay.

When you want to clarify, prove or add more support to one of your ideas, use the following expressions:

Look at the examples:

Nowadays, the internet has become an indispensable business tool. In other words, we would find it very difficult to get through a working day without it.

In recent decades, many researchers have studied the importance of group-level cognition. Indeed, to my mind, there is now convincing evidence that group activities improve the intelligence of individuals.

These words may also be useful for graph descriptions:

However, while the other three types of school declined in importance, the opposite was true in the case of community schools. In fact, while only a small minority of 12% were educated in these schools in 2000, this figure increased to well over half of all pupils during the following nine years.

If you want to have a good score for your essay, you should know how to give examples.

It’s very important to support your ideas from the real life, so you may need the following phrases to introduce an example:

Let’s look at the examples:

For instance, in the UK, many boys are reluctant readers, possibly because of being forced to read, and this turned them off reading.

Young children, on an average, spend around 5-6 hours of time watching videos over television, such as movies or cartoons.

6. Giving a reason / cause and effect

You may also need to write cause and effect essay for writing task 2. Begin sentences of this type with the following words:

Since you are not required to express our personal opinion in Task 1 or to make our own conclusion, you’re not likely to use these expression in your diagram description.

But let’s look at the examples of their usage in essays:

Therefore, due to continuous growth and prosperity, urban citizens, especially the less well off, often experience a lower standard of living.

As a result, these young ones are exposed to crime and brutality at a very young age and start believing that it is alright to resort to violence, if the need arises.

Advertisement provide vital revenue for the entertainment industry. Consequently, without adverts we could lose certain forms of entertainment altogether.

In the first task, you might be asked to describe some processes depicted on a diagram.

Here you will need the words and expressions provided in the list below to describe the sequence or categorization:

This vapour then drives a turbine to generate electricity. After it powers the turbine, the water vapour enters the condensing chamber, which is cooled by the water from the depths of the ocean.

Following this, sand and water are added to the clay, and this mixture is turned into bricks by either placing it into a mould or using a wire cutter. Next, these bricks are placed in an oven to dry for 24 – 48 hours.

For  your paragraphing and sequencing the ideas in an essay, you may use the following linking words:

Firstly, the importance of financial security cannot be undermined in the modern materialistic world… Secondly, the educated refrain from being employed in underpaying jobs, as these are less attractive.

Do not push a lot of linking words into the paragraphs and think about the appropriate use of these words.

For example, when you start the paragraph with the word Firstly, your next paragraph should start with Secondly.

Or if you start writing the first body paragraph with on the one hand, the second one must begin with on the other hand.

However, on the other hand can be used to start a paragraph which opposes the idea stated in the first paragraph:

Firstly, population explosion is the factor of utmost importance…

National authorities, on the other hand, can control this surge by implementing public education schemes regarding controlled water usage…

There are also some expressions that you may need to express your opinion.

Remember, that you mustn’t express your point of view in Task 1, so you may use these expressions only in your essay:

I do not quite agree with this view. In my opinion, developed and developing nations should work together to fight this menace that is threatening the very existence of life on the planet.

You have to read the essay question carefully to see if it asks for your opinion or no.

You will use these expressions only if the essay asks for your point of view.

Some essay questions will ask you to discuss some problem or tell about other people’s opinion on the topic.

In this case, you can use the following words:

Firstly, some people maintain that children cannot distinguish between notoriety and genuine fame.

It is generally believed that some people are born with certain talents, for instance for sport or music, and others are not.

In Task 2 of the Writing test, you need to write a conclusion to sum up all your ideas.

You have to start writing the conclusion with the following phrases so that the examiner understands at once that you’re summarizing information:

Some students tend to use expressions like in general and finally for a conclusion.

It’s wrong. “In general” doesn’t sound good in the academic writing, and “finally” is usually used when you write about your final idea in a body paragraph, but not a conclusion.

So the best way to begin your conclusion is the words stated above.

In conclusion, I strongly agree with the notion that group activities improve intellectual abilities.

Never use the same expressions in a diagram description. Moreover, you don’t need any conclusion in Task 1.

You must include an overview sentence in your answer that will summarize all the information you mentioned from the diagram.

This overview sentence may be placed after the introduction or at the end of your answer.

If you write this sentence at the end it will look like a conclusion, but it’s not really a conclusion.

You may start writing your overview sentence with a word “overall”.

As you see, in this case the overall sentence is at the beginning of your answer, after the introduction.

I personally recommend you to write the overview at the beginning.

However, it will not make a big difference, the most important thing is to have the overview.

So, this is all that concerns linking words and useful expressions for IELTS Writing. Don’t forget that you need a lot of practise to be able to use these linking words in your writing.

Every time when you write an essay at home, think about linking devices and add them into your work according to the meaning.

After a while, you will be able to use these phrases without even thinking that you use them.