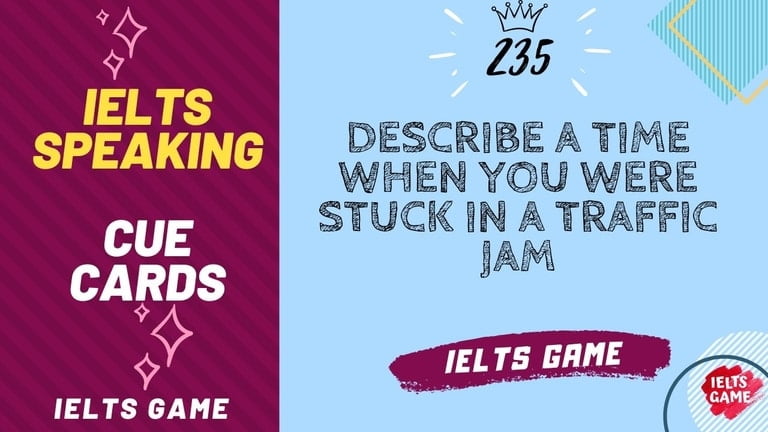 235. IELTS Cue Card -
Describe a time when you were stuck in a traffic jam

In this article, IELTS Game will add number 235 IELTS cue card sample on the series of 2022 cue cards with band 9.0 model answers and part 3 follow up questions that will help you in your IELTS test preparation.

This cue card is related to “Difficult thing description” speaking topic and asking you to “Describe a time when you were stuck in a traffic jam“ and asking IELTS speaking part 3 follow up questions from Makkar May-August 2022 cue cards guesswork.

Describe a time when you were stuck in a traffic jam.

• I live in a small town and in general, there is not much traffic on the roads.

• The only time we face traffic jams is when there is a religious procession or a political rally.

• And most of the times, these are announced beforehand so I rarely get stuck in traffic jams.

• However, last month I had gone to Jalandhar to buy some clothes for my cousin’s wedding.

• When we went, there was no traffic.

• On the way back, the main road was shut down as there had been a collision between two buses between Phagwara, my hometown and Jalandhar.

• Big cranes had to be called to remove the buses from the roads and that took time.

• This being a main road slowly led to a huge jam.

• The traffic police tried to get the traffic diverted through the service road.

• But the road was considerably narrower than the main road and because of that the traffic built up.

• At first, we didn’t think we would have to wait for so long.

• We thought it was just busier than normal and things would clear up soon.

• However, when our car barely moved 100 metres in 15 minutes, my dad went out and
enquired about what had happened.

• We couldn’t really back up as there was no space.

• So, we tried to use the time by playing games and listening to music.

• To be honest, we also spent a big part whining about government failure, although we all knew such circumstances are unavoidable.

• I don’t think I could describe what we felt at that time.

• We all just wanted the traffic jam to clear up and reach home as soon as possible.

• But the day ended on a happy note as far I as was concerned.

• Because we reached home late, my mother didn’t get time to cook.

• And we got Pizzas to eat for dinner.

Yes, India has a huge population and traffic jams are not uncommon especially in big cities like Delhi, Bombay, Chennai and Kokatta.

Moreover, there is also a bad culture of parking cars on the
roads in India, which reduces available space for parking and leads to jams.

I think the main reason for the serious traffic issues is increasing urbanisation. More and more people are moving to cities for the better quality of life but this leads to more cars than roads can handle.

Moreover, some older cities have narrow roads as they were not designed keeping today’s
use of cars in minds. These narrow roads restrict traffic flow and lead to jams.

3. What can be done to improve traffic conditions in cities?

First, I think the government should promote the use of public transportation by making it more comfortable and faster.

For example, the traffic conditions in Delhi have improved considerably after the launch of Delhi Metro. Also, the roads need to be widened wherever possible to accommodate more cars.

I think public transportation can resolve traffic issues but if it is fast and comfortable.

Delhi had local trains for long time and people did not prefer them because they were slow. However, the construction of Delhi metro, which is quite fast and comfortable, made a real dent in traffic. 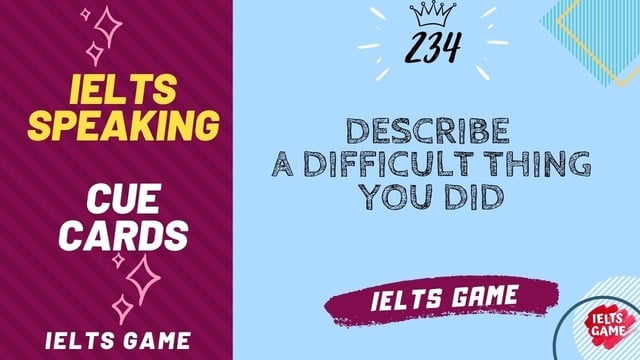 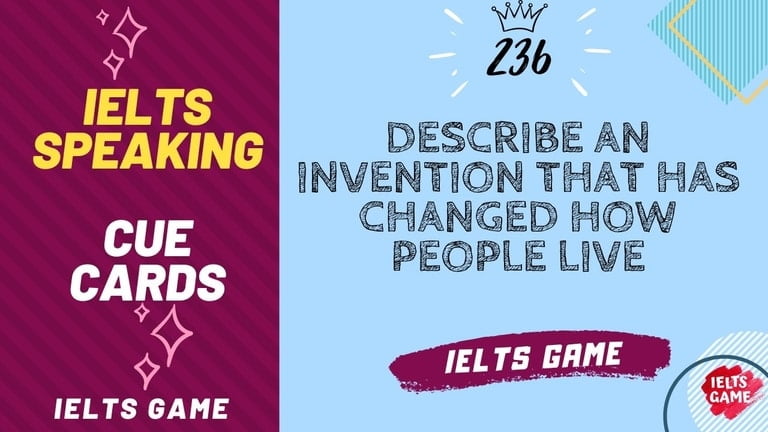 IELTS Cue Card: Describe a song has special meaning for you

IELTS Cue Card: Describe someone that made a lot of noise

IELTS Cue Card: Describe A Time When You Waited For Something

IELTS Cue Card: Describe a house you would like to live in

[Cue Card 2020] Describe a picture in your home you like