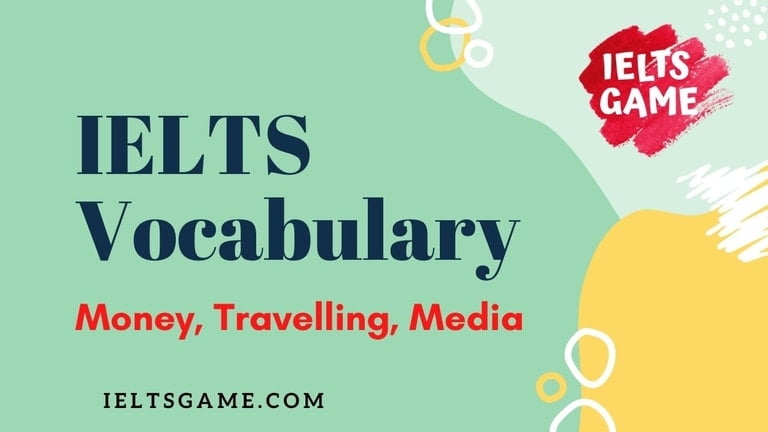 There is no special section in the IELTS test for testing your vocabulary range.

However, for the high band score you must know a lot of advanced words and expressions.

Good vocabulary is especially important in the Writing and Speaking sections of the test. In each section, there’s a criterion Lexical Resource which assesses a candidate’s use of vocabulary.

To succeed in the Speaking and Writing parts of IELTS, you need to know vocabulary on different IELTS topics.

In our previous articles we have already discussed several thematic groups of lexis, such as Education, Technology, Crime, etc.

In this article, IELTS Game want to cover three more IELTS topics: Money and Finance, Travelling and the Media.

In the modern society people cannot imagine their lives without money.

So, there is no surprise that money is quite a common topic at the IELTS exam.

There are a lot of essay questions related to money matters. For example:

Some people like to save money because they consider it is an important source of happiness. Others believe that money should be spent as it is the way to fulfill our dreams. Discuss both the views and give your opinion.

In the Speaking section, there can be topics for discussion in Part 2 somehow connected to money and finance. For example:

Describe a time when you saved up some money to buy something special. You should say:

If you want to answer the questions like this accurately and get a high band score, you need to learn different words and expressions related to money and finance.

Let’s have a look at some of them.

Expressions related to money and finance

First of all, let’s discuss two expressions with the opposite meaning:

The first collocation means to get money from some business, and the second expression says to lose money.

For example, Unless you’re the ballet theater of Hartford, the purpose of a business is to make a profit. Sometimes managers face risks with no chance of profit and the best they can hope for is not to make a loss.

If somebody makes a loss, later he can take a loan or a mortgage in the bank.

For example, The loan is repayable after a six-month grace period. They took out a £400,000 mortgage to buy the house.

Talking about loans, it’s useful to know and use English verb with the same meaning

– to borrow – to get or receive something (e.g. money) from someone with the intention of giving it back after a period of time.

The opposite verb is to lend – to give something (e.g. money) to someone for a short period of time, expecting it to be given back.

There are a lot of money operations connected with bank.

For instance, you can deposit money or, the opposite, withdraw money.

Also, in the bank you may have:

For example, The client also has the opportunity to replenish his/her deposit account during the whole period of contract validity.

It’s useful to know some verbs to talk about bank money.

Also, you need to understand the difference between the following words:

Do you know how to call the amount of money that a person earns by working? You can say a wage or a salary.

But you need to pay attention to different meanings of these words.

Wage is a particular amount of money that is paid, usually every week, to an employee, especially one who does work that needs physical skills or strength, rather than a job needing a college education.

Salary is a fixed amount of money agreed every year as pay for an employee, usually paid directly into his or her bank account every month.

When a person doesn’t work and doesn’t get any salary, you can call him a broke or bankrupt.

You are considered to be a bankrupt when you are unable to pay what you owe, and having had control of your financial matters given, by a law court, to a person who sells your property to pay your debts.

If you don’t want to be a broke, you’d better save money or invest money.

For example, It is wise to save money for a rainy day. Before you invest money in the project you got interest in, surely you need to analyze every aspect of the program.

Here’s the list of some more words and expressions that you will need to talk about money in IELTS exam:

Nowadays people have more opportunities to travel. That is why, questions related to holiday and travelling often appear in the IELTS test.

Look at the example task for the essay:

International travel has many advantages to both travelers and the visited countries. Do you think advantages outweigh disadvantages?

Here’s the example of the topic in Speaking Part 2:

Describe a memorable journey you have made. You should say:

When you want to go on holiday, you can buy a tour in a travel agency.

Another option is to find a tour operator who will offer you a good package tour.

For example, We bought a cheap package tour to Spain and stayed in a big hotel by the sea.

The opposite of it is an independent traveller.

It is a person who books plane tickets and looks for accommodation by himself without any help from travel agency.

One more type of travellers is an armchair traveller.

It is someone who finds out what a place or location is like by watching travel programs on television, looking at internet websites about travel or reading books about travel.

Now let’s look at some other types of holidays:

The business field which is responsible for providing different services for tourist while they are travelling is called tourism.

There are different types of tourism. For example, mass tourism and ecotourism.

The first type is a form of tourism that involves tens of thousands of people going to the same resort often at the same time of year.

It is the most popular form of tourism as it is often the cheapest way of holiday, and is often sold as a package tour.

Ecotourism is becoming more and more popular these days, and it offers holidays to places of natural beauty in a way that helps local people and does not damage the environment.

For example, Costa Rica’s national parks have made it a center for ecotourism.

One more type of tourism is cultural tourism.

It is the subset of tourism concerned with a traveler’s engagement with a country or region’s culture, specifically the lifestyle of the people in those geographical areas, the history of those people, their art, architecture, religion, and other elements that helped shape their way of life.

For example, The varied cultures of the small island developing States also present opportunities for the development of cultural tourism.

It is the concept of visiting a place as a tourist and trying to make only a positive impact on the environment, society, and economy.

For example, Sustainable tourism protects the environment and the rights and livelihoods of local communities.

Here are some more useful words and phrases that you can use while talking or writing about tourism and travelling:

The last IELTS topic we are going to cover in this article is the Media. First of all, let’s look at the examples of questions in Writing and Speaking:

Some people believe that the media, such as the press, TV and Internet should be more strictly controlled. Others feel that controls should be loosened to give people freer access to information. To what extent do you agree or disagree?

Here’s the example of the topic in Speaking Part 2:

Describe a television or radio station that you often watch or listen to. You should include:

Let’s start with the word information. I’m sure you know this term very well and can use it in your speech. I want to get you acquainted with several expressions with this word:

One of the ways to get information is a broadcast. It is a television or radio programme. For example, We watched a live broadcast of the concert.

You should also know a broadsheet – a newspaper that is printed on large sheets of paper, or an advertisement printed on a large sheet of paper. For example, In Britain, the broadsheets are generally believed to be more serious than the tabloids.

By the way, tabloid is a type of popular newspaper with small pages that has many pictures and short, simple reports.

People who work for newspapers, magazines, TV and radio programmes are called journalists and reporters.

One more profession related to different media is a paparazzi. People use this word for the photographers who follow famous people everywhere they go in order to take photographs of them for newspapers and magazines.

Paparazzis are often associated with gutter press, the type of newspapers that pay more attention to shocking stories about crime and sex than to serious matters.

For example, Imagine the damage if this got into the gutter press!

Gutter press often deals with celebrities’ lives. The newspapers of this kind try to find any shocking information or gossip about a famous person’ life.

Talking about media, it’s also useful to know the expressions freedom of press and censorship. These are quite disputable issues nowadays.

For example, The freedom of press, radio and television is guaranteed and prior censorship of a means of communication is prohibited.

One more interesting expression is media tycoon (or media baron).

It is a person who owns and controls a large number of newspapers, television companies, magazines, etc. and is able to influence public opinion.

A list of Words & Expressions related to Media topic

IELTS Game prepared for you a list of some more media words and phrases that will be useful for you in the IELTS test:

The more you use them the better you memorize them.

How to Overcome Test Anxiety on IELTS Exam Day