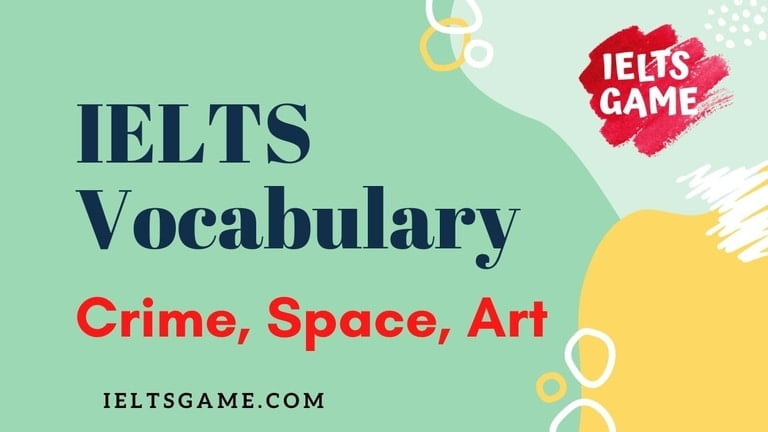 IELTS Game experts continue working on your vocabulary for the test.

That is why, in this article we will look through three popular IELTS topics and will learn words and expressions that you’ll be able to use while speaking or writing on these topics.

So, these topics are Crime and Punishment, Outer Space and Art.

In our previous articles, we covered the topics Education, Environment, Food and Globalization, Technology, Health. If you haven’t seen these articles yet, follow the links and read them.

Also, before learning new vocabulary, it would be good to find out about learning techniques.

I recommend you to study the vocabulary on topics Crime and Punishment, Outer Space and Art very carefully, as tasks based on these topics occur really often in different parts of the IELTS test.

For example, in 2020 there was the following essay topic at one of the tests:

Some people think certain prisoners should be made to do unpaid community work instead of being put behind bars. To what extent do you agree?

Or, in Part 2 of the Speaking section you may face the following task:

Describe a piece of art you like Cue Card.

You never know what you will get in the test. [Makkar Guesswork 2020]

That’s why it’s advisable to know the most common words and expressions on all IELTS topics.

If you want your friends to enlarge their vocabulary for IELTS as well, don’t forget to share this article in social networks.

We’re going to start with the topic Crime and Punishment.

First of all, it’s necessary to know the word crime.

Its definition is simple: an act against the law.

But it can have many different meanings when used in expressions, so let’s have a closer look at some of them.

Now let’s work with some other useful phrases.

If you don’t know any of them, look them up in the dictionary and write them in your notepad for future reference.

Now let’s move forward and discuss the types of crime.

Another big part of the crime and punishment vocabulary is court vocabulary.

Now let’s talk about possible penalties or the types of punishment and words and phrases to describe them.

That’s basically all for the Crime and Punishment vocabulary.

It might seem to be too difficult to memorize all of them in one day, but you don’t have to.

Take your time, memorize basic vocabulary, and remember to use them in your writing and other parts of the IELTS examination.

Space exploration is also among popular IELTS topics, though you can probably only encounter it in the Writing Section 2.

“Many people think that the government should spend money to explore the outer space, while others believe that it’s a waste of public money. Discuss both views and include your opinion”.

Well, while you might need some time to generate enough ideas on the topic, I will make sure that you have enough words to talk and write about it.

The first expression is the big bang theory. It’s not only the name of a popular US sitcom, but also astrophysicists’ theory which describes how our universe came to existence. And it is the leading scientific explanation so far.

For example, The Big Bang Theory rather in details describes the first moments of the birth of the Universe and submits to the laws of physics.

Black holes are strange objects attracting a lot of attention of modern scientists and not only them. Filmmakers and writers exploit black holes in their interest.

For example, When a larger star collapses, it continues to fall in on itself and creates a black hole.

Astronaut is a person trained by a human spaceflight program to command, pilot, or serve as a crew member of a spacecraft.

For example, Between April, 9 1959 when the first seven U.S. astronauts were presented at a press conference in Washington D.C. and 1978, a total of 73 men were selected as astronauts by the NASA.

* Please pay attention to spelling as it’s confusing for many ESL students.

Another good term from outer space is constellation.

Constellation is a group of stars representing a certain figure in the sky.

For example, Constellations are easily recognizable patterns that help people orient themselves using the night sky.

Many of you have probably heard of the word eclipse.

But it is not only the name of a chewing gum or a car. In our context eclipse is when the Earth or the moon passes through a shadow of another heavenly body.

For example, I have never seen a lunar eclipse.

Meteorite. I think in most European languages this word sounds the same, but still, I will give a definition of it.

According to Wikipedia, a meteorite is a solid piece of debris from a source such as an asteroid or a comet that originates in outer space and survives its impact on the Earth’s surface.

Cosmology – in general, it is defined as a branch of astronomy involving the origin and evolution of the universe.

For example, Cosmologists puzzle over exotic concepts such as the dark matter, the string theory, and dark energy. They question whether there is one universe or many.

The most confusing fact about the light year is that it actually measures distance rather than time.

A light year is defined by how far a beam of light travels in one year. And it is a very long distance – six trillion miles.

For example, If you are somewhere with a very dark night sky, you can sometimes see the Milky Way as a thick band of stars in the sky.

If you are familiar with the meaning of the word solar (something connected with the Sun), you might know that the Solar System is full of planets, moons, asteroids, comets, minor planets, and many other exciting objects.

Have you seen the movie “Gravitation” with Sandra Bullock?

Then you might know that it is the force of attraction between all masses in the universe; especially the attraction of the earth’s mass for bodies near its surface.

An item that has uses on Earth but was originally developed for use in space.

According to Wikipedia, spinoffs are commercial products and services which have been developed with the help of NASA through research and development contracts.

Now, we have discussed major space terms and it is time to go through some important names and facts which you also find very helpful in your preparation for IELTS.

If you find them interesting, you might read more information on the web.

A list of Names and facts related to Space

It’s time to study some art words. It is another popular topic in IELTS.

Ready to start? Be attentive, work hard, and you will get your target or an even higher score!

Let’s start with the term Art itself. It’s often used in expressions defining different types of art. There are quite a lot of them.

I hope you now better understand what is the difference between the various types of art.

Now let’s discuss some other vocabulary connected with art.

For example, Watercolours are ideal for landscape painting.

You probably heard the word sketch when discussing some projects, but in art, it is a quick informal drawing to capture the essentials of an object.

For example, Sketches are often done in ink or charcoal.

Portrait – is a portrayal of a person showing the person’s face. (could be a drawing, a photograph, or a sculpture).

For example, Some people say that artists merely paint self- portraits as it solves the problem of having to find a model.

Landscape – is a work of art that features a scene of land or countryside (in other words nature).

For example, Landscapes can range from oil paintings to gauche and pastels.

Still-life painting – is a painting featuring anything that does not move.

For example, Still-life art was common in the ancient world.

For example, Fat over lean is one of the fundamental concepts of oil painting.

Figurative art – is any type of art that accurately represents an image from the real world.

For example, Figurative art has a history as long as the history of representation itself.

Contemporary art – a bit controversial term. The easy definition is contemporary to us. It means that it has been created during our lifetimes. Usually, contemporary art refers to artworks made after 1970 by still living artists.

For example, Anything can be done in contemporary art because there is no set way to create this modern art style.

When talking about art, many people talk about harmony.

Harmony is a pleasing combination or arrangement of things. For instance, a harmony of colours.

For example, Once you understand the basics of color theory, you can start learning how to combine colours into a colourful harmony.

Apart from harmony, it’s important to know what composition is. It is the organization of the elements of design in an artwork done according to principles of design.

For example, Composition rules provide a starting point for deciding on a composition for the painting.

Now let’s discuss what the principles of design are. One of them is unity.

Unity is the coherence of an artwork. Unity allows us to feel that all parts of the piece work together.

For example, “The essence of beauty is unity in variety.” (William Somerset Maugham)

In general, the principles of design refer to the ways in which artists organize the visual elements of art.

Traditionally they include balance, emphasis, contrast, unity, movement, and rhythm.

Quite interesting, isn’t it?! Now let’s move on.

What trait of character do you think is important to have to create works of art? That’s right, creativity!

Creativity is using imagination rather than imitating something.

For example, Creative people are able to look at things and situations in novel ways and from different angles and perspectives.

Another important phrase is a focal point, which is the center of interest or activity in a work of art.

For example, A painter can emphasize a focal point through the composition, color or the range of tones used.

I want to remind you that it’s not the complete list of vocabulary on the topics Crime, Space and Art.

Describe a foreign country (culture) you want to know more about

How not to keep silence during IELTS speaking exam?