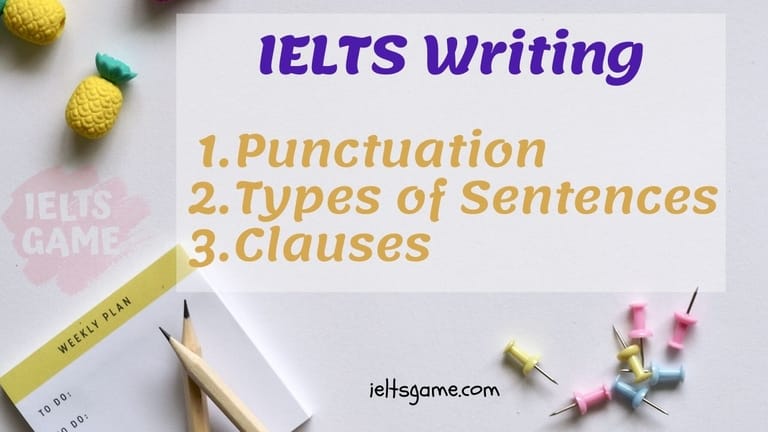 You may not have thought about punctuation before, but the correct use of commas, semi-colons and other punctuation marks is very important in IELTS Writing.

The examiners will assess your ability to write in the academic style correctly, and punctuation is very important in academic writing.

To understand how punctuation works in English, it’s essential to know how sentences are built.

Let’s take a look at most common types of sentences, also shown on the diagram below, and the punctuation required in them.

Types of Sentences In English Language 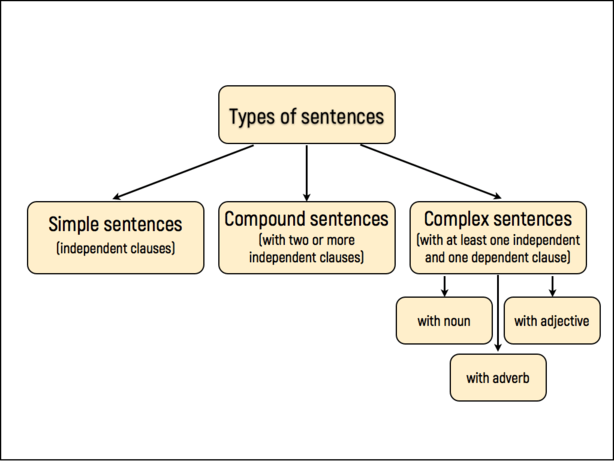 The most basic type is a simple sentence consisting of at least two parts: a subject and a verb.

– The cost of living has increased.

– Smoking should be banned.

A simple sentence can also be called an independent clause as it contains a complete thought in itself and can stand alone.

Mind that simple sentences are considered too short and ineffective to be used in academic writing.

When two or more independent clauses are combined, they form a compound sentence.

The clauses are typically joined with the help of coordinating conjunctions: for, and, nor, but, or, yet, and so.

The new testing system will not help teachers, nor will it encourage students to do better.

Many teenagers may wish to continue their education, but rising college fees can become a hurdle.

The percentage rose to 20% in 2005; it went even up even higher by the end of the interval.

Coordinating conjunctions are helpful to connect two sentences; however, if overused, compound sentences can weaken writing.

This is especially true about sentences with conjunction “and”, which does not express a strong relationship between two independent clauses.

Dependent clauses are similar to independent ones in that they too must have a subject and a verb, but they cannot be used as individual sentences.

Because alcoholic drinks are not sold to people under 18, few teenagers in the country have drinking problems.

“Because alcoholic drinks are not sold to people under 18…” – is the dependent clause which cannot be used individually.

“…few teenagers in the country have drinking problems” – is the main clause which can make a complete sentence on its own, given that it is capitalized.

Dependent clauses come in three types: noun, adjective (or relative) and adverb, and they start with specific words depending on the type.

Acting as a noun in a complex sentence, a noun clause names a person, thing, place or idea, and starts with one of the following words:

who, whom, what, which, whoever, whomever, whatever, when, where, how, why.

No punctuation is necessary between the noun clause and the main clause.

Like adjectives, adjective or relative clauses modify nouns or pronouns and start with words such as: that, which, who, whom, whose, where, why.

Adverb clauses act as adverbs and modify verbs in the main clause.

These clauses should start with the following subordinate conjunctions: after, although, as, because, before, even though, if, since, though, unless, until, when, whenever, whereas, wherever, while.

Because alcoholic drinks are not sold to people under 18, few teenagers in the country have drinking problems.

After oil is extracted, it is sent to processing plants.

Young people should heed their parents’ opinion although it is important to make independent decisions.

In most complex sentences, you can change places of clauses by using the correct punctuation:

While the price went down slowly, the demand for the product soared.

The demand for the product soared while the price went down slowly.

You should incorporate a variety of sentence structures in your writing to make it engaging and attractive for the reader.

Use fewer simple and more complex sentences to make your ideas clear and easy to follow.

Now you know what sentence types you’d better use in your writing work.

Also, it is essential that you familiarize yourself with most common types of punctuation marks.

Let’s look at the individual cases of using comma, colon, and semicolon, which can be of practical use in IELTS Writing.

Most frequent uses of a comma in report and essay writing are the following:

Many people from the East are migrating to Germany, Belgium, Netherlands (,) and the UK.

Economic decline, which went on for almost a decade, affected all aspects of the country’s social life.

The most popular event of the year, the Olympic Games, attracted over five thousand visitors to the country.

If children are largely neglected by their parents, they can grow into irresponsible members of the society.

However, many parents vote against vaccination.

Many parents, however, vote against vaccination.

Many parents vote against vaccination, however.

In addition, e-readers can save a lot of students’ time that would otherwise be spent obtaining textbooks from shops or libraries.

The line graph shows the percentage of visitors to four different attractions in Edinburgh, Scotland.

Although much less frequent than commas, colons are used:

Gun control laws should be revised because too many people own weapons which they can use in illegal activities.

Gun control laws should be revised: too many people own weapons which they can use in illegal activities.

The numbers of victims of school shootings in the US are shocking, that is, since the beginning of 2018 more people have been shot on school grounds than police officers in the line of duty.

The numbers of victims of school shootings in the US are shocking: since the beginning of 2018 more people have been shot on school grounds than police officers in the line of duty.

Electronic reading materials have several advantages over traditional books: a much lower ultimate cost of obtaining e-books, the convenience of buying and accessing material online, and almost infinite number of electronic books that can be stored.

Another punctuation mark that can be useful in academic writing is the semicolon. It is used:

The percentage rose to 20% in 2005; it went even up even higher by the end of the interval.

The requirement to wear a uniform to school solves a range of problems: it helps students focus on studies rather than looks; it prevents parents from spending too much on different kinds of clothes; it encourages equality between children from rich and poor backgrounds.

Brackets/parentheses or commas can be used to introduce parenthetical information.

A slightly higher percentage of visitors (55%) went to the Aquarium than to the Festival (50%).

Capital letters should be used to start sentences, names of people and places and in many other circumstances:

As you read different kinds of texts, mind the use of punctuation marks in them. Refer back to the rules or ask someone if something is unclear.

By making a concerted effort to study and remember punctuation use, you will increase your chances of producing error-free writing.

How to Write an Essay Fast in an Exam: AffordablePapers.com Review

One Comment on “Master Punctuation marks in IELTS Writing exam”