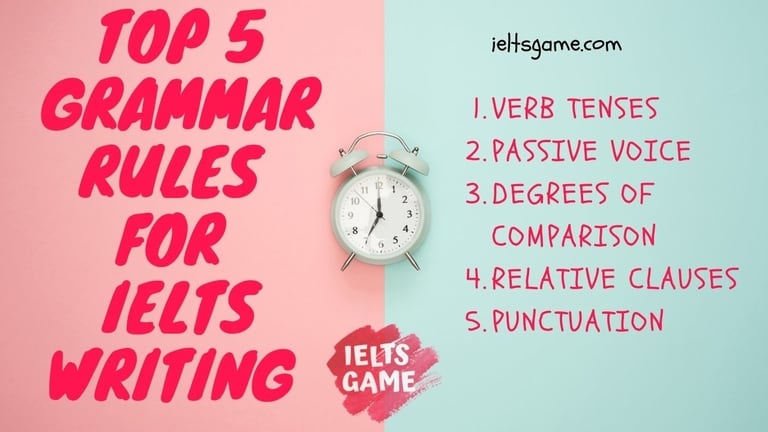 Grammar rules are important and your knowledge of grammar is not tested directly in the IELTS exam. However, good grammar is essential for getting a high score in every section of the test.

In this article, IELTS Game will discuss why grammar is so important in IELTS Writing with the top 5 grammar rules you should know to pass IELTS writing tasks.

We will review some grammar rules that will help you achieve a high band score in this section, but first, Let’s discuss why grammar is important in IELTS exam?

Why grammar is important?

If you still doubt the importance of grammar, here are some evidence to prove it:

Now let’s focus on the grammar rules that you will really need for completing the Writing section of the test:

By all means, you cannot get a high band score in IELTS without good knowledge of the English tenses.

To express your thoughts and ideas correctly, you need to master basic tenses of English.

Right, the basic ones, not all of them.

For instance, you will hardly ever need Future Perfect Continuous tense.

These grammar rules will definitely help you complete Writing Task 1 as different types of questions may need the use of different tenses.

The solar energy of the sun heats up the surface water and this warm water is introduced into the evacuated evaporation chamber, where it boils. (Present)

It is estimated that international tourism will continue to grow, so that by 2025, it will be earning around $8 billion for the country. (Future)

When you write an essay, you will also have to use verbs in different tense forms.

For instance, the gift I gave to my college on his birthday became one of the special gifts for him as he later expressed. (Past)

The argument to support this is the fact that adults have free will and make their own choices about what they eat and the exercise that they do. Children are also becoming less healthy. (Present)

Development in the health care will be greatly observed in this century. First of all, the diagnosis of severe diseases will be straight-forward as a consequence of the presence of high technological apparatuses and innovative devices. (Future).

The next grammar structure you will need for your writing is the passive voice.

The passive voice can be used to sound more formal and impersonal.

You form the passive voice by using the verb “to be” in the tense you want, plus the past participle (the third form of the verb; for example, for the verb “write” you would use “written”).

You will need the passive voice both for Task 1 and Task 2 if you want to make the tone of your writing more formal.

The passive voice is also useful when you want to impress the examiner with your knowledge of grammar or you want to vary grammar structures in your writing.

Let’s look at the example of passive voice in Writing Task 1:

The leaves are grown, they are then plucked, and following this withering of the leaves occurs. (here passive voice is used to describe the process of tea making)

The example of passive voice in the essay:

The economic boost that accompanies a successful travel industry is quite well recognised and Thailand is the best example.

Also, you can use the following set expression in passive voice to connect your ideas:

3- Degrees of comparison of adjectives

In the Writing test you will definitely need to use adjectives to describe people, things and events.

The more adjectives you know, the better they show your use of vocabulary.

Also, you may need adjectives to compare something.

In this case, you should use comparative and superlative forms of adjectives. Let’s look at the formation of these forms.

You will definitely need comparative and superlative forms for describing bars and charts in Task 1.

The tasks often ask you to compare data in these types of questions. Let’s look at the example:

The other categories were much smaller. Community contributions, which were the second largest revenue source, brought in 10.4% of overall income, and this was followed by program revenue, at 2.2%.

(As you see, just in one paragraph the author uses both a comparative and a superlative forms).

The next grammatical structure will definitely make your writing speech more interesting.

The examiners are usually not happy when you are using only simple sentences in your writing.

That is why you have to be able to make complex sentences with relative clauses.

We use relative clauses to give additional information about something without starting another sentence.

By combining sentences with a relative clause, your text becomes more fluent and you can avoid repeating certain words.

Relative clause usually refers to the subject of the main sentence.

There are two types of relative clauses: defining and non-defining.

For example: Van Gogh was an artist who used a lot of bold, vibrant colours.

For example: TV’s News at Ten, which occupied the mid-evening slot for many years, was a very popular programme.

Relative clauses are always introduced with relative pronouns and they give extra information about a person or a thing from the main sentence.

We can join two simple sentences together with the help of a relative pronoun to make a complex sentence with a relative clause:

I used to live in one of those houses. They have now been demolished.

I used to live in one of those houses that have now been demolished. (main part, relative clause).

The most basic rule in punctuation: begin every new sentence in your writing with a capital letter and finish the sentence with a period.

It’s not advisable to use exclamation marks in the academic writing as it usually expresses excitement and emotions, but these things are prohibited in the formal style.

Both Task 1 and Task 2 must be written in a neutral and official tone.

There are several special rules concerning types of sentences and punctuation marks, we will mention in a separate article.

So, I told you about basic grammar rules you are likely to use in your Writing test.

But you shouldn’t stick to only this grammar during your preparation as you may come across any other grammar structures in Listening or Reading.

It means that you must study and practice all grammar rules of the English language if you still don’t know them.

You may find a good grammar book or have classes with an English teacher who will explain you everything.

Choose any way that is more convenient for you and work hard. 🙂

Time Management as the Basis of Student’s Successful Training

Describe an occasion when you received incorrect information