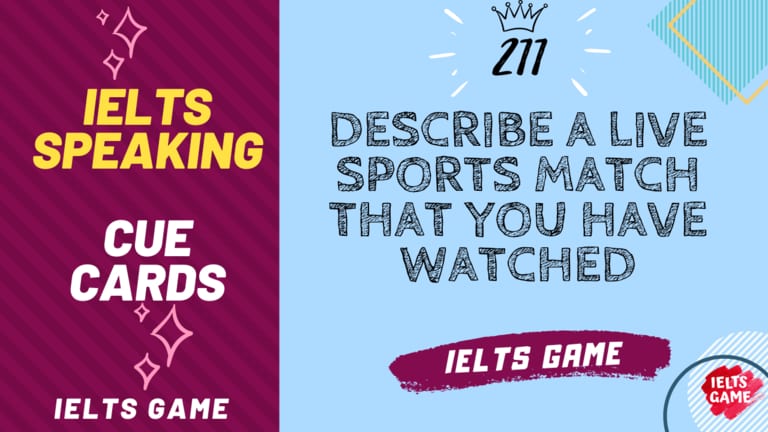 211. IELTS Cue Card -
Describe a live sports match that you have watched

In this article, IELTS Game will add number 211 IELTS cue card sample on the series of 2021 cue cards with band 9.0 model answers and part 3 follow up questions that will help you in your IELTS test preparation.

This cue card is related to “Match description” speaking topic and asking you to “Describe a live sports match that you have watched“ and asking IELTS speaking part 3 follow up questions from Makkar May-Aug 2021 cue cards guesswork.

Describe a live sports match that you have watched.

• A Sports Centre has been recently inaugurated in MY city, and I had a chance to visit it last month.

• I came to know about it through the local newspaper.

• The Sports Center was inaugurated by the famous hockey player Pargat Singh and is named after the hockey legend Dhyan Chand.

• Many different sports such as soccer and hockey are played at this stadium and it also has professional coaching staff.

• One can go and learn different kinds of sports activities or just simply go and hang out with your friends.

• Since it opened, the Sports Center was on my must-visit radar.

• So, when I found out that The Chandigarh Tigers were playing Football in a friendly match on 20th August, I made it a point to buy tickets so that I could have fun at the new Stadium.

• I must say that when I arrived at the 10-hectare Stadium, I was swept away by the thrill and flurry that filled the air.

• There were football fans getting ready to come into the Stadium to support the Home team.

• There were diners, shoppers, families, and the curious ones – like me all enthusiastic and impatient to visit our fresh sports icon.

• The stadium comprises an extensive variety of venues, specifically, a 35,000-capacity stadium, 4,000-capacity Aquatics Centre, 1,500-capacity Sports Arenas, a Water Sports Centre, a Library, and about 25,000 square meters of trading and dining hall.

• What I found the most incredible was the sight of the city skyline.

• It looked glorious and everyone felt stunned at that moment.

• The greatest part about the new Sports Centre is how close the Stadium is to the shopping area.

• It took me just five minutes to get from the shopping centre to my seat.

• I felt pleased that I had the chance to visit this remarkable stadium and be part of history, watching the first ever football game played in the new Stadium of the city.

“Describe a live sports match that you have watched”

1. Do you prefer to watch live sports or watch it on TV?

I prefer watching sports on the TV.  I think the Televisions have improved so much over the recent times that the experience is the same as watching it live.

Moreover, the luxury of sitting in the comfort of one’s house cannot be matched.

2. Why do some people like to watch live sports?

I think watching sports live is much more about spending quality time with friends and family.

People go there to break the monotony of everyday life and do something different. For some, it is also about the possibility of meeting or getting an autograph from their favourite sportsperson.

3. What kind of sports do Indian people like to watch?

Indians are crazy about many sports like hockey, football, but I think nothing can come close to the popularity of cricket. I think nearly everyone watches cricket and many play it also.

In fact, many Indians in foreign countries also play cricket even though the game isn’t popular there.

4. Do you think competition is good for students?

Certainly, I think competition makes us students work harder. Life without competition would be very boring.

Moreover, the growing population means that competition is only going to increase in the future, so it better for students to learn to handle competition from early childhood.

[2020] Describe a Leisure activity that you do with your family