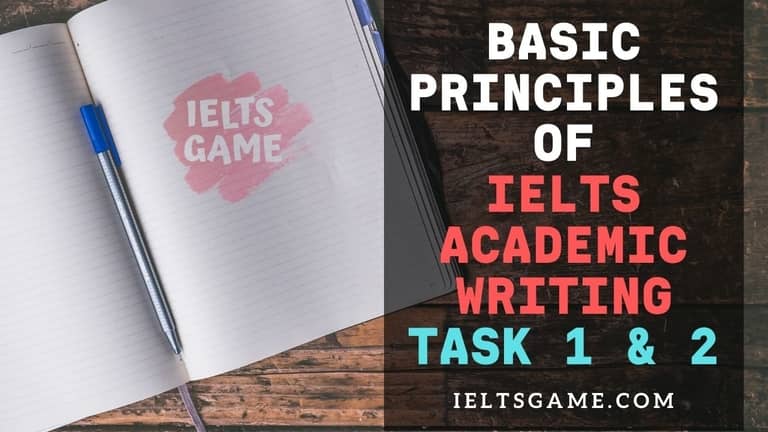 The Writing part of IELTS is different in General Training and Academic modules.

In this article, IELTS Game will focus on basic principles that you should know to successfully complete the Writing part in Academic IELTS.

In this part of Writing, you will have to describe some kind of a visual information. It can be:

Look at the example task with a bar graph:

No matter what type of a visual you are given in this part of the test, you always should keep to the following rules when you complete Writing Task 1:

How to answer IELTS Writing Task 2?

The second task of Writing is an essay.

There can be different types of essay question, and you need to know how to identify and differentiate them because for each question type the structure of the essay can change a little.

Make sure you know how to write the following types of essays:

Look at the sample essay task and sample answer to the question. It is an example of a discussion essay.

Some people think that granting children with freedom in their daily choices will result in growing self-centered personalities. However, others are of the opinion that it is vital for children to make choices about their lives. In my opinion, a good parental guidance is given when children have freedom to handle their personal matters independently.

On the one hand, some people claim that free and empowering upbringing may bring about egoism and selfishness in childhood and later in adulthood. Being raised in the environment that gives ultimate freedom to children, they become easy to be spoilt. Moreover, they find it hard to accept others’ viewpoint, and it becomes difficult for them to tolerate even rational criticism. This, in its turn, leads to social and personal problems. In addition, children can also become indifferent to people around them, growing into unsociable or merciless personalities.

On the other hand, other people believe that the choice offered to children over their daily matters can be regarded as an early training on self-management, and I agree. Especially nowadays, families become smaller and many even raise a single child. Without siblings, the child may be overly dependent on his or her parents in every aspect of life. Thus, empowering their child in making unconditional choices on their own is a way of training that will help the child learn to prioritize their choices, needs and preferences. Moreover, I think they will be able to evaluate any alternatives possibly available to make best decisions.

In conclusion, despite it is believed that freedom in making decisions will have negative effects on children both at present and in the future, I think that independence in decision making will help children become self-disciplined and organized people.

You are required to write an essay which answers all the questions in the task.

The content of your answer must be relevant to the question.

The ideas you express in the essay should be logically organized and supported.

Moreover, your essay must be coherent and cohesive, that is different parts of the essay should be logically and grammatically linked.

When you write an essay of any type, you must follow the general structure:

Both Writing Task 1 and 2 in the Academic module of the test must be written in a formal and impersonal style.

Let’s find out about the basic features of academic style of writing.

It is impossible to acquire good writing skills without sufficient practice.  You should write at least one essay every day.

First, you can try doing this without timing.

But when you write, pay attention to all rules and principles of academic style.

Only after you acquire all necessary skills and can use them without thinking, I would advise you to write essays with time limits.